BlackPlayBook Production: Your Blues Ain't Like Mine: A Drama Suite for Social Justice 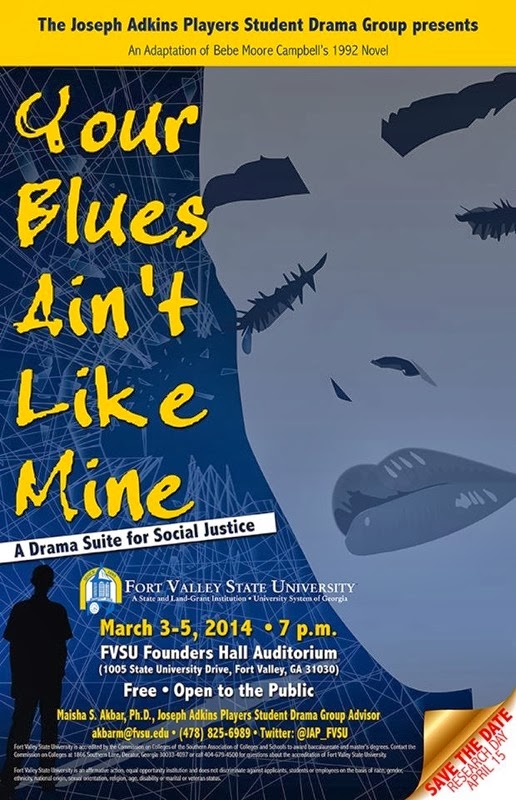 The Fort Valley State University Joseph Adkins Players (JAP) proudly presents “Your Blues Ain’t Like Mine: A Drama Suite for Social Justice” as our Spring 2014 production.  This production is our artists’ response to the circumstances surrounding the recent shooting deaths of young African Americans including Trayvon Martin, Reneisha McBride, Jonathan Ferrell and Jordan Davis.  “Your Blues Ain’t Like Mine” is made up of two one act lynching plays that include “Saving White Face” which was adapted by Dr. Maisha S. Akbar (JAP faculty advisor) from Bebe Moore Campbell’s best -selling novel, Your Blues Ain’t Like Mine (1992). In fact, Campbell’s estate granted Dr. Akbar special permission to produce this show.  The second play, “Safe” (1929), was written by Harlem Renaissance writer Georgia Douglas Johnson.  Johnson depicts incidents around the1899 lynching of Sam Hose. Hose, whose murder was one of the most infamous lynchings in American history, was a native of Marshallville, Georgia, which is only 10 miles away from The Fort Valley State University campus.
Through this performance, JAP foregrounds the anti-lynching activism that was spearheaded by Ida B. Wells Barnett; as well as that of the NAACP, the Association of Southern Women for the Prevention of Lynching  (ASWPL) and many other visual and literary artists who sought to interrogate cultural fictions that were (re)produced to justify the extralegal murders of countless African Americans.
Under the direction of Dr. Maisha S. Akbar, Fort Valley State University’s Joseph Adkins Players (JAP) student drama group performs on a “play-ground” of performance, scholarship and activism.  In addition to delivering cutting edge productions, JAP members use theater to engage in scholarly research and consider issues of social justice.   JAP operates as an official student group that represents FVSU at national theater and communications conferences such as those of the National Communication Association (NCA), the Black Theatre Network (BTN).  JAP’s organizational motto is, “Saving the Drama for the Stage.”
JAP thanks you for your continued support of our shows. Follow us on twitter @JAP_FVSU. Enjoy the show!
Best regards,
Maisha S. Akbar, Ph.D., JAP Faculty Advisor
Akbarm@fvsu.edu
www.Blackplaybook.com; @ablackplaybook