"In our so-called democracy we are accustomed to give the majority what they want rather than educate them to understand what is best for them."

"In the long run, there is not much discrimination against superior talent. Carter G. Woodson" (1875-1950), Founder of Negro History Week (now Black History Month)

Through spiritual, speech, poetry, song, drama and dance, “We Go High” salutes Barack and Michelle Obama’s eight year tenure as President and First Lady of the United States. As the first African American couple ever to do so, “Barack and Michelle” (as we affectionately refer to them) effectively modeled “superior talent” as leaders of the free world. Although there may be debate about their contributions immediately following his administration, in the long run, President Obama’s legacy is sure to be highly regarded.

Not only have the Obamas shared with the American public an admirable record of service, we are also graced with their speeches, words of wisdom to which we can refer whenever needed. As students and scholars, we can read, share, examine and recite Michelle’s and Barack’s speeches as we educate ourselves to understand, in the words of Carter G. Woodson, “what’s best for us.” Even further, we might use their speeches as blueprints for how to become superior talents who would lead, speak, teach, sing, dance and inspire. Who knows what heights we might achieve when we rise above petty concerns of the majority to “go high” as Black history figures in our own rights.

Under the direction of Maisha S. Akbar, Ph.D., JAP performs on a “play-ground” of performance, scholarship, and activism. JAP is active in national organizations such as the National Communication Association (NCA) and Black Theatre Network (BTN). JAP’s organizational motto is “Saving the Drama for the Stage.”
Posted by blackplaybook No comments:

BlackPlayBook Production: "How to Avoid the Service Trap" Workshop

Am looking forward to presenting 5th Annual Faculty Women of Color in the Academy National Conference. If you can't make it to the conference, be sure to sign up for my ebook, "How to Avoid the Service Trap" on right side of blog.
Posted by blackplaybook 1 comment:

BlackPlayBook Review: "Hidden BlackPlay" or Why I am Looking Forward to BET’s “The Quad”


The same year Whitley Gilbert and DeWayne Wayne graduated from Hillman College, a fictional Historically Black College and University (HBCU) on NBC’s A Different World, I, in real life, graduated from Southern University and A&M College (Baton Rouge, LA) , where Dr. Delores Spikes served as University President. Throughout my matriculation as an undergraduate, I greatly admired Dr. Spikes’ superior administration. However, I can now admit that I took for granted her leadership. It never occurred to me that Dr. Spikes, as a “hidden figure”[1] of Louisiana STEM (Sciences, Technology, Engineering and Mathematics) education, must have dealt with sexism and racism along her “trailblazing” journey. She was not only the first Black woman to receive a Ph.D. in mathematics from Louisiana State University, but Dr. Spikes was also the first woman in the United States to serve as president of a university system. Even further, Dr. Spikes went on to earn national accolades and other prominent positions in higher education.

Fast forward more than twenty years to my own position as a tenured professor (and founding program director) of theatre and performance studies at an HBCU. Now, I am intimately familiar with cultural forces affecting women’s leadership opportunities. In the more than ten years since I have been working at an HBCU, I have yet to work under a Black woman HBCU president in a permanent position. As documented by Marybeth Gasman as well as other references such as a www.hbcudigest.com article entitled, "Where Have All the Black Women HBCU Presidents Gone?"recent years have seen a severe reduction in the number of Black women HBCU presidents, many due to (premature?) dismissal, but also to retirement and untimely death.

In my position as an HBCU art professor, I simultaneously perform as scholar, instructor, administrator, fundraiser, director, advocate, performer, collaborator, etc., compounding my insight into intersectional forces at HBCUs that expect women’s service yet do not promote her into leadership positions. Not only do I face undervaluing because of my gender, but I also face marginalization due to my field of study.

Marginalizing art at HBCUs is pretty much an oxymoron since these campuses function as site- specific, cultural performance spaces, especially with regard to their educational missions and practice of Black performance traditions (i.e. performing bands, dancing dolls and choirs, Divine Nine etc.). It is precisely for these reasons, however, that HBCUs provide rich backdrops for films and television shows depicting Black coming of age stories, as exemplified by Spike Lee’s School Daze (1988), as well as film and television versions of Drumline (and others). Furthermore, HBCU campuses are perfect frames for hashing out conflicts unique to black communities such as (economic) class issues or light skinned vs. dark skinned privilege. 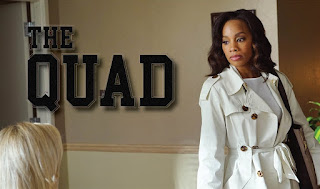 Art and HBCU life once again collide in BET’s newest offering, The Quad , which depicts another fictional HBCU, Georgia A&M University, as a nexus of Black life. However, unlike off-screen where women presidents are currently hard to find, “The Quad” features a Michelle Obama inspired woman president, Dr. Eva Fletcher, who is cogently played by theater, television and film actress, Anika Noni Rose.

The Quad explicitly foregrounds HBCUs’ remarkable positions as Black performance sites through the network’s website where viewers can interact with the show by “enrolling” in the fictional university. Viewers can also watch videos in order to get to know the show’s featured performers including students, an athletic director and band director, as well as Madame President herself.

Although I’m not yet sure of Dr. Fletcher’s academic background, The Quad performs meta communication in casting Rose, who is a real-life graduate of an HBCU theatre program (Florida A&M University). In doing so, the show moves toward explicit recognition of HBCUs as performance spaces where an African American woman (i.e. radical black feminist) visual or performing artist would be a most obvious choice as president.

Additionally, The Quad performs intertextually by casting Jasmine Guy as a university board member. Guy is a well- known alumnus of HBCU based television and film projects, having starred in both A Different World (as aforementioned, Whitley Gilbert), as well as School Daze.

Can the image of President Fletcher effectively provide groundwork for new possibilities in HBCU leadership? Could The Quad cause powers that be to consider a woman art professor for an HBCU president position? Of course, we can’t say for sure now. However, I, for one, am excited about the creativity that the show re-presents to HBCU’s community of alumni, faculty, staff, students and supporters.
[1] This term references the 2017 feature film release by the same name.
Posted by blackplaybook 1 comment: