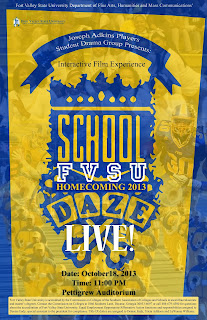 The Fort Valley State University’s Joseph Adkins Players student drama group is pleased to present “School Daze Live!  An Interactive Film Experience” as a part of Homecoming 2013. Our production goal is to foreground the performance based traditions of Historically Black Universities and Colleges (HBCUs) as modes of critical thought and activism. Not only does Spike Lee’s 1988 homage provide an entertaining backdrop for homecoming fun (Wildcats TurnUp!), but it also serves as a reference for African American intellectual traditions such as Carter G. Woodson’s “Mis-education of the Negro,”  and W.E.B. DuBois’ “The Talented Tenth.”  Lee also alludes to Malcolm X’s and Nelson Mandela’s respective activism outside of the black academy.
The twenty five years since “School Daze” was released spans a remarkable generation of economic, social and cultural change.  Who could have possibly anticipated any ONE of the following events, let alone them ALL? Among other ordeals, America has endured:  Rodney King’s beating and L.A. riots; O.J. Simpson trial, rise of privatized prisons and “The New Jim Crow,” the dot com, real estate and (pending) school loan bubbles; Tyler Perry, 9/11; wars in Iraq and Afghanistan; Enron and Worldcom corporate scandals; Barack Obama’s election to the Presidency of the United States; and Trayvon Martin’s murder/ George Zimmerman’s acquittal.
Through it all, HBCU’s have managed to survive. However, HBCU’s existence in an age of a Black POTUS is still a source of controversy.  President Obama’s tone when addressing Black audiences, such as Morehouse College’s 2012 graduating class, is said to be condescending. Most recently, arguments have been levied that through changes to loans often used by black students, President Obama is neglecting HBCUs. If “School Daze” were being filmed today, such debates might be included in it.
Under the direction of Maisha S. Akbar, Ph.D. FVSU’s Joseph Adkins Players perform within a “play-ground” of performance, scholarship and activism. JAP is an official performance based student group that is active in national organizations like the National Communication Association, the Black Theatre Network and the Association of Theatre in Higher Education.  JAP’s motto is “Saving the drama for the stage.”
Thank you for your continued support of our endeavors. Enjoy the show!
Happy Homecoming!
Maisha S. Akbar, Ph.D. – Assistant Professor of Speech/Drama. Faculty Advisor, Joseph Adkins Players
akbarm@fvsu.edu,  www.Blackplaybook.com, @ablackplaybook