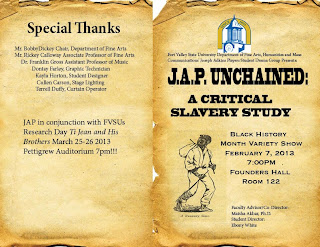 In celebration of Black History Month, Fort Valley State University’s the Joseph Adkins Players Student Drama group presents “JAP Unchained” which is comprised of multi-genre performances that guide us from slavery to emancipation.  This work includes excerpts of slave narratives, correspondences speeches and dramatic literature that document the experiences of American slaves.
Through “JAP Unchained,” the Joseph Adkins Players seeks to foreground these documents as critical representations the “peculiar institution” (American slavery).  In contrast to contemporary, popular representations, “JAP Unchained” presents slavery through the points of view of its subjects, the slaves themselves. Unlike Lincoln (2012) or D’jango Unchained (2012-13), the images of slaves in “JAP Unchained” do not function as supporting characters nor does the story have a fairy tale ending. “JAP Unchained” are lead characters who are well defined yet complex.
Under the direction of Maisha S. Akbar, Ph.D., FVSU’s Joseph Adkins Players perform within a "play-ground" of performance, scholarship and activism.  JAP is an official, FVSU performance based student group that is active in national organizations including the National Communication Association, Black Theatre Network and the Association of Theatre in Higher Education.  JAP’s motto is “Saving the drama for the stage.”
Dr. Akbar congratulates Ebony White, student director of “JAP Unchained” as well as the cast and crew, many of whom first time performers.
Posted by blackplaybook